This weekend I came to a better appreciation of living in a swing state: It can be pretty exciting and fun the week before a national election if you stop answering your phone and watching live TV, and take advantage of all the live appearances instead. Swing states get lots of “love” from the candidates in the form of additional visits, some in more intimate venues. This provides a unique opportunity to get your children up close and personal with the election process.

This weekend, my two older daughters were able to attend Romney-Ryan events here in Colorado. Saturday my 10-year-old Claire attended a huge rally at the Comfort Dental amphitheater (formerly known as Fiddler’s Green) with some close family friends. She got a chance to sit in a special VIP section close to the stage and hear presidential candidate Mitt Romney and his wife Ann address the crowd of approximately 17,000 people. Claire’s play-by-play of the event goes something like this: “It was really loud and then his country singer sang for a long time, and then a few different people talked, and THEN Mitt Romney and his wife finally came on stage!” She did remember a few key points, though, like “something about how Romney helped Staples do better in business,” and “Mitt really loves his wife!” But the real highlight of her evening was stopping at Jimmy John’s for sandwiches on the way home and getting a “Vote Jimmy” button. Love that girl!

Last night, my husband and I took our eldest daughter, Audrey (11 1/2), to hear Romney’s VP running mate Paul Ryan speak at the Douglas County Fairgrounds, where we were pulled out of the crowd and asked if we would like to sit right behind the stage! This was a much more intimate venue than Fiddler’s Green, and the crowds of people that didn’t even make it in the arena faithfully stood outside to listen from speakers in near-freezing temperatures. It was nice to be out of the cold (somewhat – it was an open air arena!) and be able to sit in the bleachers while waiting for the big event. We were so close that we actually made it on the NBC affiliate news coverage in the background while Ryan was entering the arena! We’re on the top left corner of this video freeze frame: Audrey is the smiling girl in striped shirt with thunder sticks waving, while I’m the one standing next to her holding my iPhone, of course… It was exciting to have such great seats for the occasion, but I was especially grateful because it gave Audrey — who was attending her first political event — a chance to feel like she was part of history in the making, no matter what the outcome. She had educated conversations with adults sitting around us, and she really paid attention to the speakers. She was engaged, excited and thankful to witness a part of the election process firsthand. As a “tween” she already has very strong personal convictions, and it’s a privilege to give her as much opportunity as possible to gain more perspective on what it means to be an American. Maximizing the weekend’s election excitement, we decided to make facts about the election process the subject of today’s lapbook. Earlier this month, another mom in our homeschool support group shared a free election lapbook template from Homeschool Share, as well as a “color in” 2012 electoral map that the girls could use to first fill in the projected results, then flip over and fill in the actual results for comparison. We spent most of the afternoon cutting, coloring, and researching answers (and yes, that’s Claire using her iPod Touch to browse the Web). I am really glad I saved this project for today, because after their experiences this weekend, the girls were so much more connected to their work. It was fun to overhear them comparing the two events they attended, as well as chime in with their opinions and projections as they filled out each section. They were very pleased with the finished product, especially the electoral map we’ll be coloring in tomorrow night as the results start coming in. 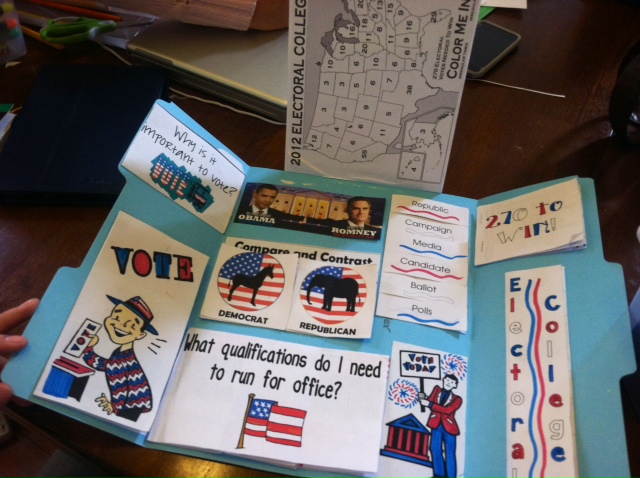 I want to be clear that I’m not writing this post to advocate any political party or voting decision. On the contrary, I believe what’s important is that parents not only be responsibly engaged in the election process and do your due diligence in sifting through the political “marketing” to make educated voting decisions, but that you also invite you children to join you in this journey.

My earliest childhood remembrance of anything political was when my second grade public school class wrote letters to President Carter. I can’t remember what I wrote, why we did it or if the letters were actually mailed or just an assignment. We didn’t talk about what the president stood for, just what he did. But I do remember recognizing the significance of a president and thinking that it seemed like a pretty important job, and I wondered why I would really have anything to say to him.

Oh yes, and I do remember learning a thing or two since that time from Schoolhouse Rock…

Our household wasn’t very engaged in politics when I was growing up. My mom was born in Mexico, had a Green Card, and didn’t become an American citizen until after I was in college. My stepfather was a citizen but never shared any political feelings with us kids. My birth father (a longshoreman and longtime union man) was a Democrat and I knew that, but I didn’t know why. In fact, my dad and I didn’t really talk about politics until I left home for college at age 17 and registered to vote Republican two years later, when the 1992 election loomed on the horizon. As you can imagine, he wasn’t happy about it, but that’s another story for another day…

My point is this: The limited time we have with our children, even when homeschooling them, is a vital preparation time to equip them for the future. I want them to learn now what it means to be a U.S. citizen, how our government works, how we are different from other countries and why, and how they can be engaged in the democratic process. And I’ll be happy if that means simply voting in every election they are eligible to vote in. I have to admit that although I registered to vote in college, I didn’t take my vote seriously until years later. I took AP government classes in middle school and high school, and I understood quite clearly the logistics of our government and the basics of the party system. However, I didn’t appreciate how politics actually did apply to me and had always applied to me: From my mom’s citizenship status and my dad’s union-provided benefits that put braces on my teeth, to buying our first home as a couple and navigating the ups and downs of our economy (including a layoff) and being able to choose what we believe is the best option for educating our three daughters.

So I am especially grateful to be able to include my girls in this year’s election journey, especially now that they are old enough to think critically and understand that elections are about more than just campaign slogans.

I’m also making sure that they know I believe no matter who becomes president, God is still King. That means we can trust Him with any outcome, believing that “all things God works for the good of those who love him, who have been called according to His purpose.” (Rom. 8:28). So I place my hope in Him, and this is the hope that keeps me from becoming jaded and cynical during these divided times.

activitiesdaily journalelectionselementaryfamilyFathersgovernmentlapbooksNextGen Homeschool
By Renée GotcherNovember 5, 2012Hands-On Homeschool, Real-Life Homeschooling2 Comments on Up close and personal with the elections

2 Replies to “Up close and personal with the elections”