Our family decided to attend this year’s Oklahoma Homeschool Capitol Day. I took our two daughters to this event seven years ago, when our son Joel was only a year old. Hannah had made homemade apple pies for our Representative and Senator. We hadn’t attended since then because the girls didn’t want to go again, and Joel wasn’t really old enough to get anything out of it, in my opinion. However recently my husband and I have realized the importance of attending and supporting local homeschool events, even when they may not directly pertain to us. As beneficiaries of the great freedom to homeschool in Oklahoma, we need to do our part to support and defend those rights for our family — and even more so for our children’s future families. So this year, we drove an hour and a half, through the snow, to attend this event. We took our son Joel, as well as our nieces Stormie and Rachael. Of the five of us, I was the only one who could actually remember going to the State Capitol before.

The first thing we took note of was the beautiful architecture of the building. Rachael was especially impressed: She went on and on about how much she loved each detail of the building. We arrived minutes before 9am and got through registration in time to find the Governor’s Blue Room, where a Legislative Alert Meeting and then Town Hall Meeting were taking place. The kids tried to go to one of the historical reenactment rooms, but they were full at the time. Instead, they went upstairs to listen to some homeschool music groups perform. The Legislative Meeting was led by Steve Montgomery of Oklahoma Christian Home Educators Consociation (OCHEC). He introduced the bills that were up for committee research this session, then turned the floor over to Home School Legal Defense Association (HSLDA) lawyer T.J. Schmidt. Between the two of them, they explained the OCHEC and HSLDA positions on each bill. Most of the bills presented this session had to do with tax credits to be given to charter and homeschools — which sounds like a good thing but, as with anything else the government gives us, comes with strings attached.

As of right now, home education in Oklahoma isn’t even defined. In the Oklahoma State Constitution, there is an allowance for “other means of education” left up to the parent. So homeschoolers fall under that definition. (See my recent post on this topic.) However, once the state government starts defining home education, regulations will follow.

What is “home education” legally? Right now in our state, it is whatever the parents structure it to be. However once the government starts giving tax money to anything that has to do with home education, then they will need to (for taxpayer accountability sake) define who will get that money — and that definition will bring with it government regulations. Basically, any government handout is risky. For more information on each bill, visit the Legislative Alert.

Another bill that will be introduced this session is HB1384, a Parental Rights bill. The HSLDA and OCHEC are firmly in support of this bill, which you can read in full here.

Here is a little about what the OCHEC website has to say about this bill:

“The whole purpose in this standard is to ensure that Oklahoma law recognizes that parental rights are fundamental. The language used in House Bill 1384 follows a number of U.S. Supreme Court cases and is closely modeled after a statute in Arizona. Besides further acknowledging the fact that parents have the right to direct their child’s education, House Bill 1384 also protects the following:

There is also language in House Bill 1384 that states that parents have inalienable rights that are more comprehensive than those listed in the bill, and that it does not prescribe all rights of parents.

Finally, House Bill 1384 does not authorize or allow a parent to engage in any abusive or neglectful conduct. Under the bill, no parent would have an excuse to abuse or neglect a child in violation of already existing Oklahoma law. The bill would also not provide any protection for any parental action or decision that would end life.” After the bills were presented, the meeting turned into a Town Hall Meeting where parents (and students) asked questions that were answered by Mr. Montgomery and Mr. Schmidt. Representative Sally Kern came in to talk about the Parental Rights Bill, which she co-authored.

After the Town Hall Meeting, everyone met in the rotunda for a Homeschool Rally. It was loud! There were several really great speakers, and HSLDA’s T.J. Schmidt spoke again briefly. Then Representative Dr. Michael Ritze spoke and read an order from Governor Mary Fallin declaring February 9-15, 2014 to be Oklahoma Homeschool Week! Dr. Ritze was a homeschool parent himself more than thirty years ago. 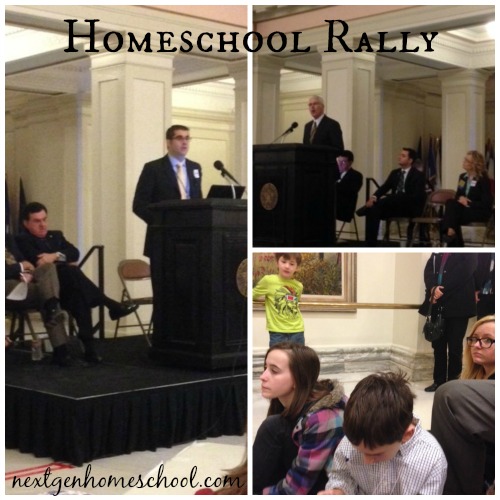 Then Senator Nathan Dahm spoke. He was a homeschooled student and is currently the youngest Senator in the state. You may have heard of him: He is the Senator that took on Piers Morgan on gun control and has since introduced the “Piers Morgan Gun Rights” bill.

After he spoke, Dr. Everett Piper, President of Oklahoma Wesleyan University, spoke — and I must say he was my favorite speaker, as well as for my husband Jason. He has written a book entitled, “Why I am a Liberal and other Conservative Ideas.” He spoke eloquently and with passion about the state of education in America today. Then it was lunchtime. We chose to buy the boxed lunches, as well as buy our Representative’s lunch, provided at the event. We sat with our Representative Jadine Nollan and had a wonderful time getting to know her and telling her about our family and why we love being home educators. We also spoke with Senator Brian Bingman and Representative Mark McCullough, who are both customers of the donut shops we own in Sapulpa. Mr. McCullough spoke to Stormie about becoming a page, and he spoke to Jason about Boy Scouts and other neighborly topics. We already know that Mr. McCullough is pro homeschooling, and it is always nice to see him. The kids were excited to go to his office later, where he gave them Coke in glass bottles and took a picture with them. After lunch, we found our way to the 5th floor Senate Gallery and were honored with the other homeschool families in attendance during the opening of the daily Senate Session. Shortly after the session was over, we headed home. It was a long but invigorating day. Oklahoma has the distinction of having the longest running annual homeschool state capitol event: twenty-nine years running. Today I am very proud to be a resident of the great state of Oklahoma!

Does your state do any events for homeschoolers at your capitol? If so, have you ever attended with your family? What are state regulations about homeschooling like where you live?